LIVR – Data Validation Without Any Issues

Each programmer must have come across the necessity to check user’s input a number of times. Having a 12-year experience in web development, I have tried my hands at dozens of libraries but didn’t manage to find the one to handle all my tasks.

Issue #1. Most validators check only the data having the described checking rules. It’s crucial for me that each obviously forbidden user’s input is ignored. Meaning that the validator must cut all the data for which the validation rules aren’t defined. It is a fundamental requirement.

Issue #2. Procedural description of the validation rules. I don’t want to think about the validation algorithm every time; I just want to describe declaratively how the proper data must look. Basically, I want to set a data scheme (will explain at the end of the post why not the “JSON Schema”).

Issue #4. The validation stops at the first field with an error. This approach doesn’t allow highlighting all the faulty/necessary fields in a form at once.

Issue #5. Non-standardized error messages. For instance, “Field name is required”. I can’t show a user such an error because of the following reasons:

What I mean to say is that not the ordinary error messages but the standardized error codes must be returned.

Issue #6. Numeric error codes. These are just poorly adapted for use. I want the error codes to be intuitive. Don’t you agree that the error code “REQUIRED” is much more comprehensible than a code “27”? The logic here is similar to one applied when working with exception classes.

Issue #8. A limited set of rules. The standard rules are never enough. The validator must be extensible and susceptible to an addition of the rules of any complexity.

Issue #10. Inability to conduct an additional data processing. Practically in any case, when there is validation, there is also a necessity of some kind (oftentimes preliminary) of an additional data processing: cutting the forbidden symbols, converting text into lowercase, deleting excessive spaces. It’s especially relevant to delete the spaces at the beginning and the end of the line. They don’t belong there in 99% of cases. I know that I’ve already said that the validator mustn’t do anything except the validation.

5 years ago, a decision was made to develop a validator which would be free of all the above-mentioned problems. Thus, LIVR (Language Independent Validation Rules) came to be. There are Perl, PHP, JavaScript, Erlang, Java, Python, Ruby implementations. The validator has been used in the production for lot of years, practically in each & every project of a company. The validator works both on a server and directly on a client’s machine. You can play around with it here – webbylab.github.io/livr-playground/ 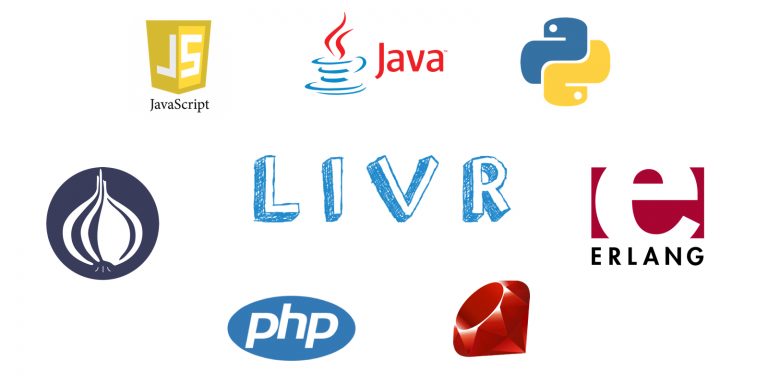 The key concept was that the validator’s core must be minimal and all the validation logic must be located in the rules (in their implementation, to be exact). Meaning that there is no difference between the “required” (checks the availability of a value), “max_length” (checks the maximum length), “to_lc” (converts data into lowercase), and “list_of_objects” (helps to describe the rules for a field which includes an array of objects) rules.

In other words, the validator doesn’t know anything about:

All this is a responsibility of the validation rules.

Since the task was set to create a validator independent of a programming language (some kind of a mustache/handlebars stuff) but within the data validation sphere, we started with the composition of specifications.

The specifications’ objectives are:

The example of the validation rules description for an authorization form:

The example of the validation rules for a registration form (demo):

The example of an attached object’s validation:

In what manner the validation rules are described? Each rule consists of a name and arguments (very similar to function calls) and, commonly, is described by the following manner {“RULE_NAME”: ARRAY_OF_ARGUMENTS}. An array of rules (which are applied in the subsequent order) is described for each field.
For example,

i.e. we have a “login” field and a “length_between” rule which includes 2 arguments (“5” & “10”). This is the example of the fullest form, but the following simplifications are permitted:

All three formats are identical in nature:

It is described in more details in the specifications’ chapter “How it works”.

All the rules can be divided into 3 global groups:

Here’s a general list of the rules that must be supported by each of the validator’s implementation: 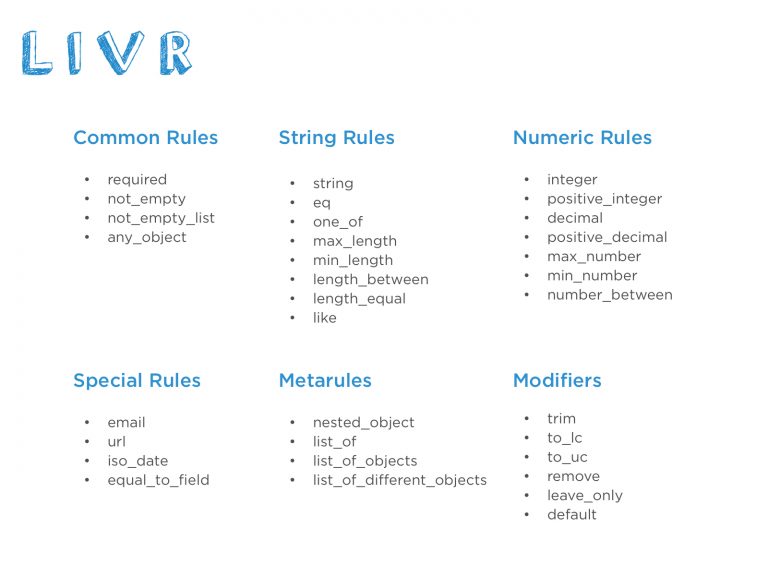 Rules for data transformation (the names start with a verb)

The examples & error codes for each rule can be found in the LIVR specifications. Let’s only discuss the metarules in more details. The metarules are the rules that allow combining & transforming the simple rules into the more complex ones for complex hierarchical data structures’ validation. It’s important to understand that the validator doesn’t make any difference between the simple rules and the metarules. The metarules are identical to the mentioned before “required” (yes, I am repeating myself).

nested_object
Allows describing the validation rules for the nested objects. You will use this rule very often.

The error code depends on the nested rules. If a nested object isn’t a hash (dictionary), a field will contain the following error: “FORMAT_ERROR”.

Allows describing the validation rules for a list of values. Each rule will be applied to each element of the list. The error code depends on the nested rules.

Allows describing the validation rules for an array of hashes (dictionaries). It is similar to the “nested_object” but always awaits the array of objects. The rules are applied to each element in the array.

The error code depends on the nested rules. In the case when a value isn’t an array, a “FORMAT_ERROR” code will be returned for a field.

List of different objects
It is identical to the “list_of_objects”, but there are cases when an array contains the objects of various types. The object’s type can be defined by a special field, e.g. “type”. The “list_of_different_objects” allows describing the rules for a list of objects of a various types.

The error code depends on the nested validation rules. If a nested object isn’t a hash, the field will include the “FORMAT_ERROR” error.

In this example, the validator will check “product_type” in each hash and use the respective validation rules according to the field’s value.

As I’ve already mentioned, the rules return the inline error codes comprehensible to any developer, e.g. “REQUIRED”, “WRONG_EMAIL”, “WRONG_DATE”, etc. Now, the developer can understand where exactly the error has occurred; all that’s left is to accessibly explain in which lines it’s occurred. In order to do that, the validator returns a structure identical to the one it received for a validating purpose, but it includes only the lines with errors & inline error codes instead of initial values in the fields.
For instance, there are the validation rules:

and the validation data:

eventually, we get the following error

The return of the comprehensive error messages always requires developers’ extra effort. There’s only few REST APIs that provide a detailed info in error messages. It usually comes as far as “Bad request”. Seeing the error’s related field and the field’s name isn’t enough as data can be hierarchical and include the array of objects. In our company, we handle such moments the following way – we describe the validation rules via the LIVR for each & every request. In the case of the validation error, we return the error’s object to a client. The error’s object includes the error’s global code and an error received from the LIVR validator.

For instance, you’re passing data to a server:

you get this as an answer (validation demo on livr playground):

This is much more informative than just “Bad request”.

The specifications includes only the most commonly used rules, but each project has its own specifics and, oftentimes, there occur such situations where some or other rules are lacking. Considering that, one of the key requirements for the validator initially, was an ability of its extension with the custom rules of any type. Initially, each implementation had its own rules’ description mechanism. However, starting from the version 0.4 of the specifications, we have introduced a standard way of creating the rules based on the other rules (creation of aliases), which covers 70% of the situations. Let’s review both options.

Furthermore, one is able to set up their own error codes for the rules.
For instance,

and in the case of the address validation error, we are to get the following message:

Registering fully-featured rule on the example of JavaScript implementation
The callback functions, which do the checking of values, are used for the validation. Let’s try to describe a new rule called “strong_password”. We will check the values to consist of over 8 characters and include digits & letters in upper & lowercase.

Now, let’s add the ability to set the minimum number of characters in the password and register this rule as global (available in all the validator’s instances).

In such manner, a quite simple one, the registration of the new rules occurs. If you need to describe the more complex rules, it would be best to look through the list of standard rules implemented in the validator:

There is a possibility to register the rules that would not only validate the value but also modify it. For example, convert into uppercase or delete extra spaces.

What to do if I want to create own implementation of the LIVR validator?

If you wish to make your own implementation of the validator, check out the set of test-cases, it was created in order to make things easier for you. If your implementation passes all the tests, it can be considered correct. The test suite consists of 4 groups:

Each negative test includes “errors.json” instead of “output.json” with the description of an error which must occur as a result of the validation. In the alias tests, there’s an “aliases.json” file with aliases that must be registered in advance.

Why not JSON Schema?

A quite frequently asked question. Briefly, there are a couple reasons:

JSON Schema includes interesting features, like an ability to set the maximum number of elements in the list. In the LIVR, however, that is implemented simply by adding one more rule.

Best practices for building CLI and publishing it to NPM

Introduction CLI stands for the command-line interface. It’s a common way to interact with different processes. Tools with CLI are often used in software development,…

Modern software development practices often contain just the most basic features in the core program, with additional functionality supplied via add-ons such as plugins. Browser…

Alexey Krol
Subscribe to the best creative articles feed
Up